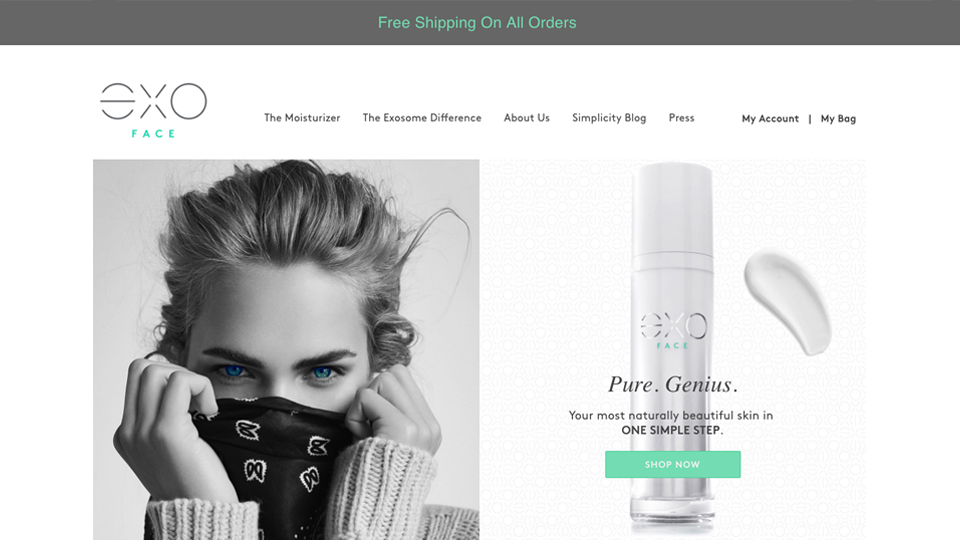 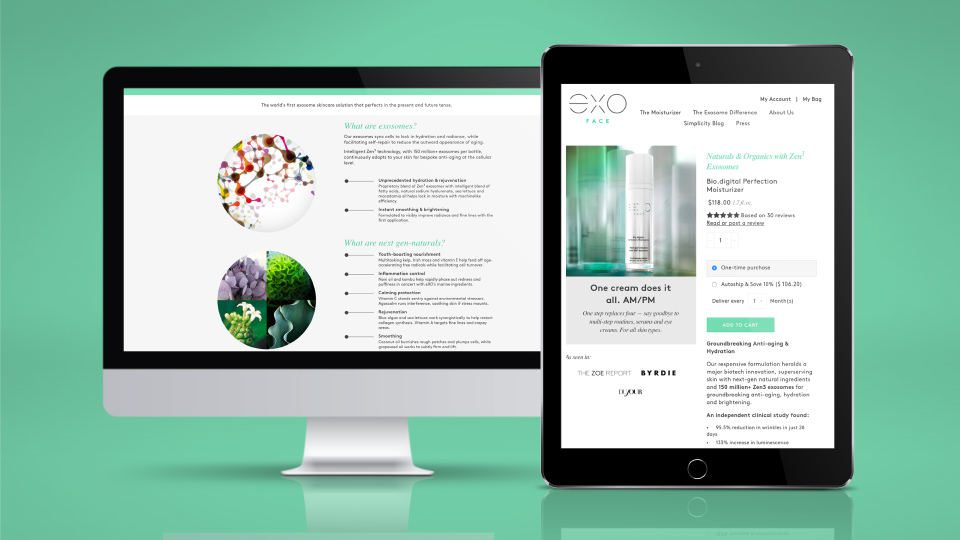 The idea seemed simple enough; provide a product that cuts through the saturated skincare market, where opportunity continues to boom with millennials, by providing a single solution that solves the problems of anti-aging, hydration, brightening, inflammation control, calming protection, rejuvenation, smoothing & firming for all women.

How to enter a crowded market with laser-sharp focus and win.

Exoceuticals arrived at our door, under a different name…and that was the name of a biotech firm based out of North Carolina, which had in their midst a patent-pending technology called Zen3. Zen3 is a pioneered process for duplicating exosomes (exosomes = tiny messengers found naturally throughout the body that transfers unique data from one skin cell to another). While researchers are studying how exosomes help grow and regenerate specific types of tissue; Catherine Enright, sister of the CEO of Biotech Research & Development in NC, believed this breakthrough technology had a cosmetic application. And, while the possibilities are endless, a universal anti-aging moisturizer could be conceived for women of all ages, skin types and origins.

Although Catherine, who had a background steeped in luxury branding certainly recognized the trend of simplification tied to multi-functional beauty products that was beginning to counter the personalization trend of years prior, the largest question loomed, was the all-in-one concept viable?

We were retained by Catherine and Peter to get to work on their go-to-market and eCommerce strategy, requiring omnichannel and strategic planning, which covered everything from ‘what to call it’ (branding CID), profile/demographic definition of the core customer, quality standards, COGs/price point and margin positioning, distribution strategy online vs. offline, key eCommerce best practice tactics in addition to establishing analytical targets, and an overall marketing strategy.

“Our greatest challenge will be to get people to understand that our product is better.” Cat Enright

We quickly learned through both intuitive logic, strategic planning and our comp analysis that unlike the days when La Mer entered the market and celebrities could literally sell anything, was that across generations there was an appreciation for natural ingredients, and the medical side of things, as opposed to the blanketed “dermatologist-recommended”. We discovered that women were utilizing the power at their fingertips (i.e. their browser or mobile device) to research in a couple key strokes, customer reviews, social scores and many were going a step further to research on medical websites such as WebMD to learn more about an ingredient they were not yet familiar.

And, there we had it, the power of the medical ingredient; all we needed to do was to unlock it. In conjunction with our comp analysis that benchmarked the soon to be named eXO against the toughest competition in the market, where we prioritized 52 go-to-market tactics within a 1 – 18 month time period that would bring eXO to its maximum growth potential.

In tandem, we handed over the reins to Carlos Prieto, Graphic Designer, where he constructed not only a recommendation for the core identity, but also the direction of the logo and its first packaging iteration, in which to compete across the market. On the higher end, eXO would compete indirectly with those who might invest in La Mer…and on the aspirational end, those younger women who would begin to invest in their regimen at an earlier age (than prior generations).

The second portion of our Strategy engagement was to offer robust financial planning defined through big data KPI’s that defined, down to the dollar, the go-to-market strategy across all P&L and Balance Sheet assets and liabilities; to secure executive buy-in at the biotech firm and to balance projections across product manufacturing P.O.’s with sales demand generation.  In neta-speak this is called Capital Raising and we believe it is an imperative for every strategic ascension. Thanks to their team and the evolved strategy, eXO far surpassed plan, gaining recognition from celebrities and influencers alike.

What’s next for Exoceuticals? Well, that’s easy…it’s time for investment… and with results like these, wouldn’t you bet we’re working with Cat and Peter on positioning them for their next growth iteration? (We’d take that bet!)